The Adventures of Joe & the Little Giant

ds Little Giant and together with Tall Hall the Red Dragon, Mousey the wizard mouse, Peggy the dog and other friends who live in the woods, they have adventures, travel by space-plane to a singing island, fly past the moon on a magic carpet. It is an exciting adventure story for 4-9 year olds, packed with enchanting illustrations. This is a book that will both grip a child’s imagination and develop their reading skills. The illustrator, Philip Rundall, has exhibited in London and regional galleries including the Royal Academy Summer Exhibition. 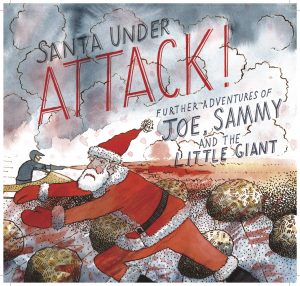 Brothers Joe and Sammy are the leaders of The Protectors. Together with their friends Little Giant, Tall Hall the dragon, Peggy the dog, Mousey the wizard, and the boy Sandy, the brothers help children and animals in danger around the world and beyond.

‘Santa Under Attack’ follows the Protectors’ first outing ‘The Adventures of Joe and the Little Giant’.

In 1916 George Harrap published an edition of The Fairy Tales of Hans Christian Andersen which included specially commissioned illustrations from a new young Irish illustrator, Harry Clarke. His talent was quickly acknowledged and he became recognised as one of the key illustrators during the golden age of gift-book illustration alongside Aubrey Beardsley, Kay Nielsen, Edmund Dulac and others. In all, he created 16 full-colour and 24 monochrome illustrations for this edition. For this new collection, fifteen of Andersen’s best loved tales have been re-written and with Clarke’s fabulous illustrations will create a wonderful gift book for children young and old.